Why do I keep exceeding my printer licenses when I am not adding any actual printers?

Is this scenario familiar? You purchase a NiceLabel license for five printers. The license manager will allow you to add more temporarily. However, you are soon receiving a message “You are using more printer seats than your license allows…” And yet you still only have five printers!

Why You Typically Exceed the Number of Licensed Printers.

Printers Are Not Consistently Configured

NiceLabel considers a printer to be “new” if it cannot find the same printer in the existing list of currently used active printers. NiceLabel uses an internal naming convention to uniquely identify each printer. This includes:

The same printer as set up by WSD (top) and TCP/IP (bottom) is seen as two different printers by NiceLabel.

If the workstations or servers are not set up to CONSISTENTLY use the same exact printer driver, or if they do not define the printer with the same location, NiceLabel will count each different configuration as a unique printer.

IT managers must take care to control the setup of new printers on all workstations and network servers. Otherwise, they risk counting share printers multiple times, as seen above.

Often, design users will run a quick printing test. They may want to test the label setup against different types of printers, or check barcode resolution on printers with different DPI (dots per inch). At EBI, we sometimes print a label to Adobe Acrobat to create a PDF that can be easily sent to a client.

However, each different print destination, including printing to a PDF file, may count against the printers available – at least temporarily. A designer who sent a label design to a PDF file to email as well as a laser printer for sharing physically could use up two “printers” as far as NiceLabel is concerned.

Similarly, using port monitors, or software that uses port monitors as a means of setting up printers can also cause NiceLabel to identify a shared printer as multiple printers. Port Monitors often assign unique port names per workstation to the same shared printer on the computer. Again, each unique combination of port and printer name counts as an individual printer.

Microsoft’s WSD (Web Services on Devices) is a good example. If you use Windows’ Printers & Scannerswithin Settings and select the Add device button to locate a shared printer, Windows will then look for printers that support WSD. WSD assigns that printer a unique port ID when it is added. This is not the TCP/IP address. As a result, this shared printer now takes up another printer license.

For users of LMS Enterprise, Business or Compliance Cloud versions of NiceLabel, there is a feature called NiceLabel Printer Management. This allows the client to standardize the print driver by storing it on the server, whether it be on-site or cloud-based. It pushes updates to the workstations automatically. The administrator can use NiceLabel Printer Management to set up driver packages for use in new installs and updates. 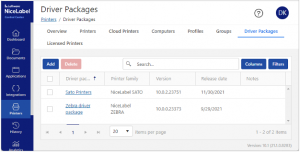 Windows allows a more hands-on approach to setting up a printer. Often called standard TCP/IP, the administrator defines the printer location explicitly and directly using the printer’s IP address and port. Typically the default port for printers is 9100. This approach minimizes the potential for creating unique location names. As a result, we also minimize the chance that NiceLabel sees these location names as individual printers and deducts them from your available licenses. 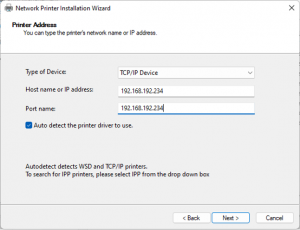 The number of actively-used printers drives the cost of a NiceLabel license. This not only includes the initial purchase, but also the ongoing Support and Maintenance Agreement (SMA) and subscription costs. Better management of how you configure your printers will reduce the number of “phantom printers” consuming printer seats, and therefore reduce your operating costs.